skip to main | skip to sidebar

Two weeks ago I had the opportunity to go to Faxe, in southeast Zealand (Sjælland), to help out with some land seismics. It was really nice to be outside again – to shut down the computer to be outside in the beautiful colours of the autumn. Well is helps when the weather is really nice, as it was.
The project was a collaboration between the University of Copenhagen and the University of Aarhus. The idea was to see the subsurface structures of the chalk and to find coral reefs, just at the edge of Faxe limestone quarry. The main question was: "Why do we find coral reefs here?". A total of about 7 km seismic profile will help answering this question, and the results should be presented at Geomuseum Faxe in a couple of years. 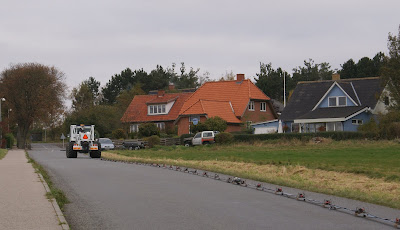