skip to main | skip to sidebar

June 28 at 15.25 hrs it sounded like some helicopters were closing in on the institute from the north. Then came the shaking. And it was gone.

It was an earthquake, with the magnitude of 5.7 according to USGS's home-page for earthquakes (http://earthquake.usgs.gov/eqcenter/recenteqsww/) near Illapel. I was happy that the epicenter wasn't near Valparaiso, even though I have always said that I would like to experience an earthquake I'm satisfied with the small ones of magnitude around 4. Actually, on the Mercali scale this earthquake corresponded to a 4 near Valparaiso - quite enough for me.

Monday 2nd of July was a holiday here in Chile, in honor of Saint Peter and Saint Paul. Actually friday was the actual holiday, but the day off were moved to monday. The saints were celebrated all weekend. Sunday I went to Caleta de Membrillo, just by the institute, with my friends mother to see the procession and launch of Saint Peter, the saints of the fishermen. The day off on monday meant that Juan Diaz had the opportunity to show me Cajon de Maipo as he talked about already when he was in Århus in april. It is a really beautiful place and if you are a bit interested in geology I am sure the you will find it very interesting. I think it was especially beautiful with all the snow.

This wasn't the only snow I was going to meet. Monday morning on 9th July I had my flight home. I was going from Santiago via Buenos Aires and Paris to Copenhagen. But in Buanos Aires we were surprised by snow. Yes SNOW in Buenos Aires - first time since 1918. Since snow is not a every winter happening, the airport was not equipped to move snow. Therefore the captain of the plane postponed the flight until the next day, and I got to see some of the snow of Buenos Aires and to spend the night at Sheraton Hotel. It was quite exiting to experience snow in Buenos Aires, even though this was my first time in the city ... . But next time I'll hopefully not be traveling on my own – it's quite boring to be in a fancy hotel by yourself. 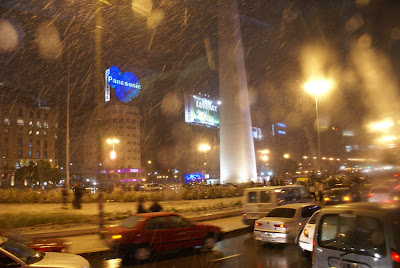